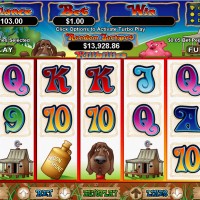 February was a big winning month for players of Rushmore Casino.  While many of the winners won their impressive sums by playing slots games, a video poker variant, and European Roulette also had lucky big winners.

As for the top slot winners at Rushmore online casino, Lucille B, another US player, won $42,987.50 when she played the ancient Rome themed slot game Caesar’s Empire.  Meanwhile, David P won an impressive $37,655 after playing one of the most popular Rushmore slots, Coyote Cash.   Other slots that had big winners include Enchanted Garden, Incan Goddess, Pay Dirt, and Achilles.

Omni Casino has been giving its players the best gaming experience with the highest... | December 3, 2012

November is an exciting month for online gamblers interested in trying out new... | November 18, 2012